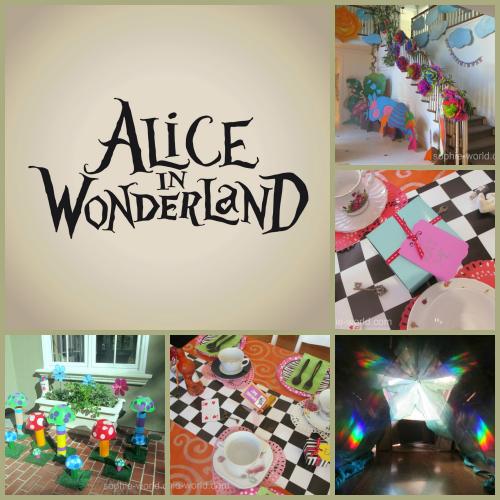 Last week I mentioned that a dear client of mine sent me an array of “pins” to help create her daughter’s Alice in Wonderland party.  As I mentioned in my post she sent me lovely pictures of what was probably a $5,000.00 party. I had, understandably, a more realistic budget. I had to create a party that not only looked good, but was fun to attend.  Remember, the reason I got into this business was not to make pretty pictures, but to create exciting adventures and memories. Happily, I think we were able to achieve both with this party. The kids were coming from school, and so I wanted the entry to excite and engage them all from the moment they entered.  To do this, we created an outdoor/garden effect by attaching huge paper flowers to the staircase. We peppered in our standard trees, clouds, sunshine,and oversized mushrooms. To complete the Alice in Wonderland feel, we added big hand painted cut outs of the rabbit and the worm. The hallway was lined with brightly colored helium balloons each sporting a dangling playing card from it’s ribbon. The Mad Hatter Tea Party element of the birthday was very important to my client, so we decided to spend a good deal of time decorating this room.  We laid the table with layers of color and patterns - starting with a standard black tablecloth linen, covered by a swirly orange confection, topped with a black and white diamond table runner. Each place was set for lunch with a mismatched teacup and saucer, heart shaped doily, pink and zebra plates, green napkin, and black cutlery. We embellished the table with tiny wrapped boxes marked “eat me”, and assorted colorful bottles marked “drink me”. We scattered red and white roses, antique keys, and cards on the table to fill in any voids.  To create that crazy, out of control atmosphere, we used blue tape to attach cards of all sizes (I purchased several styles of oversized cards from Amazon) around the room.  Behind the birthday throne we created an explosion of cards - so that it looked like the deck was being thrown into the air - much like one of the last images from the book. This was actually more of an activity, but it was also part of the decor.  A winding tunnel created from cardboard boxes, mylar walls (which we have in stock and use all the time for all kinds of parties), pillows, blankets, existing furniture, rugs, and these big ikea leaves we bought for a jungle party.  We repurposed our inexpensive jungle decor (link to old blog) to create that “down the rabbit hole” experience.  The boys at the party (mostly friends of the birthday girl’s older brother, but also assorted cousins and family) spent the majority of their time playing in this room, and begged us not to take it down after the party was over. I love games - especially ones that make kids laugh - here’s some of my favorites that we played.

Opposites - When we were sitting at the table for lunch, I told the kids that yes meant no, and no meant yes.  That everything had to be opposites at the Mad Hatter’s table.  This was great fun, as I would say - “would you like some tea”, to which they had to answer “no tea for me”. If they answered “yes”, I would pass them by.  It was great fun for the kids and for us servers as well, as the kids would come up with funny ways of asking for more stuff, like - “whatever you do, please don’t pass me the scones”, and “these scones are just plain awful, I really would be upset if you placed another one on my plate”.  Once they got the hang of it, it was really fun, and turned what could have been a 10 minute tea break, into a half hour laugh fest.

Chasing the Rabbit - I had all the kids make a circle, then turn to their left so they were each facing each other’s back.  They then spread their legs to make a tunnel.  One guest was chosen to be Alice.  Her job was to start at a certain pair of legs and make her way around the circle. Meanwhile, overhead, the “tunnel” guests were passing a stuffed white rabbit backwards over their heads to one another.  Basically it’s a race to see who gets back to the start first - rabbit going in one direction, girl going in opposite direction.

A Very Merry Unbirthday - This is based on the game Hot Potato Surprise.  I played the song “A Very Merry Unbirthday” from Disney’s Alice in Wonderland, on my guitar while the guests passed around the package.  I stopped the music at intervals. Whomever had the package opened it and received their prize before the music started again.  If two guests were caught in the middle of a pass I let each open a layer (helped speed things along).  I made sure everyone, of course, got a prize.

The Cheshire Cat - Based on the game,  "Make em Laugh!”  Guests try and keep a serious face, while the Mad Hatter does everything within his/her power to make them smile.  The main rule, is no touching, but everything else is fair game.  Anyone caught smiling, smirking, laughing, or otherwise changing their serious expression has to sit down.  We kept the Mad Hatter time limited to 1 minute per round to keep things moving. Pop up Rabbits - The Rabbit is such an important character in the book that we figured we had to make Pop-Up Bunnies for a craft.  Based on my pop up groundhog - we simply elongated the ears, and poof, instant bunny. Drink Me Bottles - The kids had a blast making little bottles and tubes filled with Sandy Candy, a powdered candy that comes in flavors and colors.

Key necklaces/bracelets - We ordered bunches of antique key charms in various sizes and let the kids make their own jewelry. For a goodie we found these colorful mugs at the Dollar Store and filled them with individually wrapped madeline’s, hot chocolate, a tiny rabbit, and pack of cards.  We wrapped it all in cellophane and tied it off with a big bow that sported an antique key and thank you tag.

All in all, the event ended up looking like a million bucks at a fraction of the cost!  Even Grandma, who is a retired party planner herself, gave us kudos for our imaginative, on budget, decor!  For me, though, the biggest bang for my buck was how happy and excited the kids were.  I heard one kid exclaim as she left, “I feel like I just visited Wonderland”.  Who could ask for anything more!