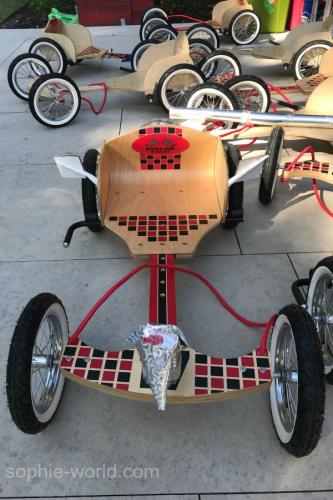 For many years now, I've had the pleasure of running a private summer camp for a beloved client.  It's two sessions: mornings with 8-year-olds, and afternoons with 11-year-olds.  This is possibly one of the harder things I do, when you consider the time spent planning, organizing and executing. But it's also one of the more fulfilling things I get to do as an event planner.  I get the gift of watching these children develop from year to year.  The joy of exploring different avenues of art, science, and play with these two groups for an entire week is an amazing luxury.

As my boys mature, it gets harder and harder to find things that will fully engage them.  Which is why this year my client and I decided it would be fun to do something entirely different.  Instead of following our standard routine of a different camp theme each day, we focused on one main activity - building a real go-kart. 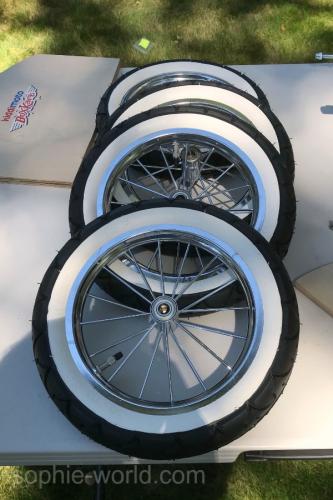 At first, I thought we would split the boys into pairs and have them work on a vehicle in teams. However, the more research I did, the more I realized that I did not want to enter into the realm of soapbox go-karting without some serious help.  Truthfully, I wasn't worried about building the body of the vehicle.  I knew I and my boys could handle that. What worried me was the wheels.  I knew to the core of my being that if we had faulty wheels the whole endeavour would be a disaster. 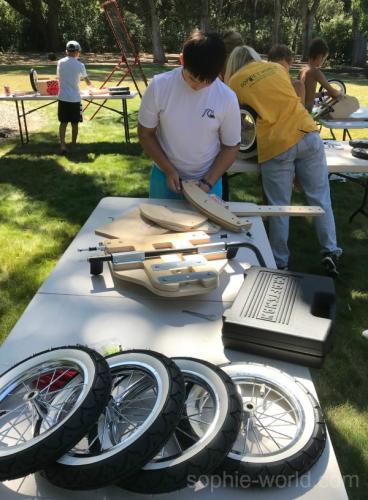 That's when I discovered this organization in Europe called GO KART DADDY.  They sell both full-out go-kart kits and wheel kits.  Given the number of campers, I opted for the full kits, 1 per kid.  Due to availability, I was forced to choose 2 different designs. They were very similar, so it wasn't a big deal for the boys.  One kit needed more assembly than the other, but this wasn't an issue since my more crafty boys opted to take those. 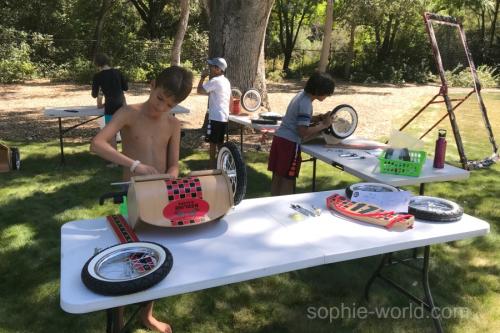 To make sure things went smoothly I brought on extra staff.  Each staff member worked with 2 boys, ensuring that everyone received the attention they might need.  We set up tables under the shade of this enormous tree in my client's backyard, one table per boy.  On each table, we laid out the pieces, instructions and tools that came with each kit.  We live in a day and age where kids are used to following complex lego instructions, so I wasn't worried about the boys being able to assemble their vehicles.  However, I know that there are always glitches, and sometimes it's hard to tell a screw from a nail from a special widget.  Laying the parts out ahead of time also allowed for me and my staff to confirm that all the necessary pieces were present. 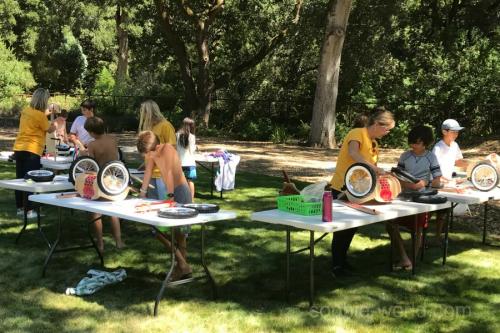 Here are my biggest take aways from the process:

#1.  It really helps to know what you are doing ahead of time.  If I had a do-over I would have ordered an extra of each kart so that I knew what assembling each entailed.

#3.  I would have brought a drill with assorted bits in all sizes.  As great as the kits are, not all of the holes lined up.   Had I brought my trusty drill to camp I could have simply widened any offending holes.  In the end, we were able to make things work, but it could have saved us all some frustration had I had a drill. 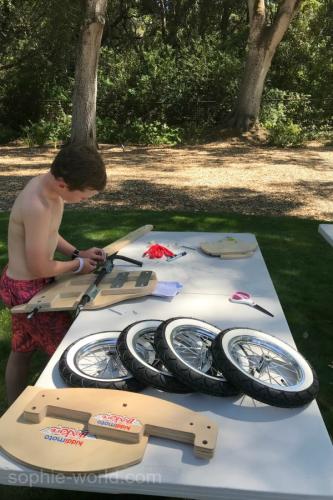 The karts took about an hour and a half to two hours to make, depending upon the model.  Given that we had time, we took our karts out for a spin.  One of the funnier aspects of these karts, given their wheel size, was that the kids could manipulate them like wheelchairs.  This meant that everyone could basically get around on their own, without the benefit of a hill or a friend pushing them. 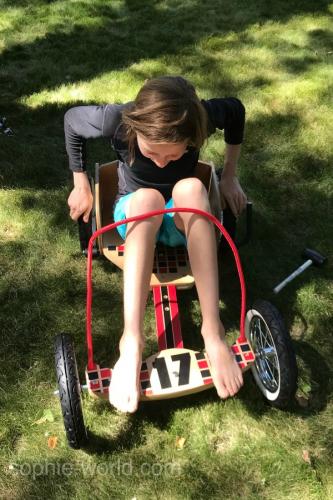 Here's a few things I learned about using the karts:

#1.  Start small.  We had a smallish hill in the client's driveway that served as the perfect learning pad.  There was also a steeper part connected to this hill.  Just like with skiing, it's best to start on a bunny hill and learn the ropes.  There is a learning curve with these old fashioned karts.  Kids are used to things like scooters and E-Z riders that respond very differently.

#2.  If you can avoid macadam or concrete in favor of grass, do so.   There were a few tumbles and a few road rashes on day one.  And whatever you do, watch out for gravel.

#3.  Make sure that you have plenty of adult supervision.  Kids will tend to be daredevils and forget about things like physics and gravity. 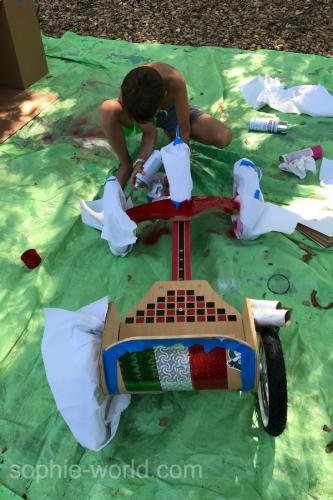 After the kart bases were constructed the boys spent the remainder of our time together developing two different things - embellishments and jousting.  My campers got it into their heads that these go-karts, although being fun to ride down the hill, were really meant for battle.  And so we spent the next days together painting, embellishing, and outfitting for battle.  I created a "spray zone" where we could safely use spray paint to colour the karts.  I used a combination of big Amazon boxes, tarps and paper towels to keep the spray contained.  I used paper towels and blue tape to mask areas like wheels during spraying and taught the boys that turning the spray can upside down causes clogging. 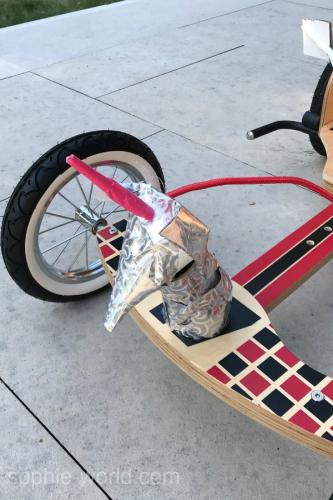 My boys are makers, so the embellishing of the karts went on for days.  One of my boys decided to do his entire kart pink with "Fancy Nancy and Barbie stickers" (which, by the way, he asked me to bring).  The boys also collectively came up with the notion of using their karts, not for racing, but for jousting, they spent an entire day creating "weapons" for the joust.  In the end, we ended up nixing anything that wasn't either a pool noodle or a water balloon as a weapon.  Sadly, I have no pictures of our jousting because my beloved iPhone has the battery life equal to the attention span of a 3-year-old. 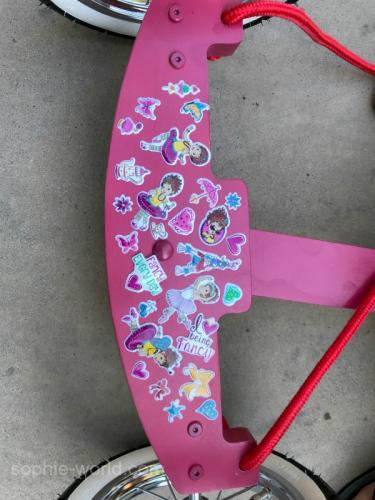 Here's what I learned about our "jousting".

#1.  Divide into two teams. Make sure that the teams are of your choosing and not of the kid's choosing.  If you are like me, you have spent enough time with your kids to know who are the "Alphas" and who are the team players - make sure you put together equitable teams.

#2.  Make sure everyone is as protected as possible - we made sure everyone had eye protection, helmets, and that there were no sharp or hard weapons in play.

#3.  Keep matches short - we kept ours at 1 minute...however, I had the timer, so if things seemed particularly dangerous or slow I could speed things up or drag them out with the 5-second count down.

#4.  If all else fails, make water balloons your only weapon. 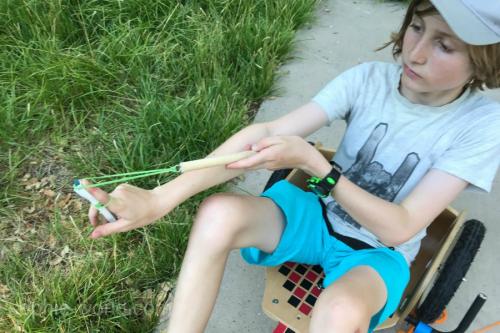 I have to say, that this may have been the best camp ever!  But it may be because in my heart of hearts I know that this might be my last summer with my "big boys".  12 is one of those weird ages...you get some boys who are still naive, but for others 12 is the tipping point into the adolescent world where nothing is satisfying.  It's not their fault...hormones are racing...the outside world is influencing...life just is....

I know that my beloved campers need to grow past me...that's part of life.  But I will always treasure the laughter, the frustration, the tears, the figuring it out, the conquering, and the celebrations that were part of summer camp for all these amazing years.  But for this year...we built...we raced..we battled... 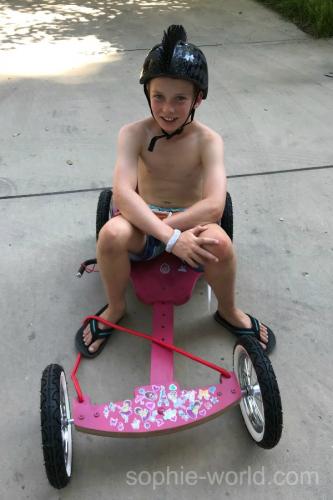