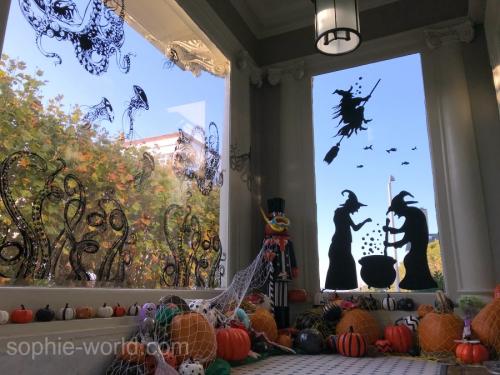 One of the best things about my job is when I get to collaborate with my young clients.  For the past 4 years, I've had the great pleasure of creating new and interesting Halloween decorations based on the suggestions of the 3 young ladies who reside in what my office has come to call, "The Spooky Tree House". The first two years the girls were quite young. So the master of the house left us to our own devices.  But last year, the gals started having opinions about the decor, and so we started theming the tree tableaus according to their suggestions.  Last year was storybooks - and included such timeless classics as Gulliver's Travels and Peter Pan.   My team loves a challenge, so when I contacted my client the August to see if there were any special requests, I was thrilled to hear that the general consensus was for an Under the Sea Halloween. Immediately, my chief prop builder, Steve, started sketching out ideas.  In fact, the first two weeks of August were spent sifting through the countless numbers of amazing ideas he came up with...from skeleton crewed submarines to giant squid attacks.  Ultimately we settled on the following tree tableaus. An old fashioned pearl diver, complete with diving bell helmet and a swarm of flesh-eating piranhas starts off at the top of the hill. I am quite partial to this one - I love that the diver has a fishy in his helmet, and that the giant pearl is actually a glittery skull. Next, we move on to our morphed animal tree.  Here we find two "dog" fish, a "cat" fish, and my personal faves, a true blast from the past, a family of sea monkeys. The sea monkeys have their own coral castle (which of course the girls just loved). Midway down the hill we find a scuba diver making great haste to avoid a "JAWS" like shark. I'm hoping his rapid ascent doesn't cause the bends, although I suppose the alternative would be much worse. The next tree finds a pair of greedy pirates, spying on the next tree, which features a full out skeletal mermaid enjoying her chest of treasure.  The children walking by were just as intrigued by her loot. The last tree, though not outwardly political, does warn us of the dangers of overfishing our waters.  Here we find a poor mermaid stuck in a fisherman's net. But all hope is not lost, as her 6 mermaid sisters come to her aid. As to our band of ghosties - this year they are all taking swimming lessons. Even the spiders have snorkels. The trees in the back are filled with ghosts and bats each one outfitted with appropriately sized swim goggles. As for our staircase, this year we decided to forgo the bats and instead focus on an aquarium feel. Our poor witchy has tried, yet again, to conjure something magical, by using messages in a bottle for guidance. We find her taking a deep dive into her cauldron. The pumpkin king who always adorns the top of the stairs has happily joined the swim party and furthered the fun by covering his pumpkin patch in nets instead of spiders webs. The big windows are adorned with silhouettes of "sea witches" and Kathulu like tentacles, octopi and jellyfish. The girls have helped us set up every year since we started, but this year they were extremely invested in how things were set up.  This is one of those special times when being a party planner takes on a special meaning.  It goes beyond just setting up fun decorations and becomes about making memories.

Just like that mermaid under the tree, it's something that I will treasure forever.