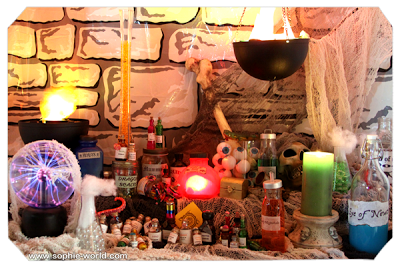 Today, I want to share the spotlight with my friend Kristen Sze, who recently borrowed a few witchy elements to create her own Harry Potter-inspired party for her daughter. Kristen is a news anchor for San Francisco’s ABC7, and she’s always a blast to work with! In fact, her latest party inspired me! Here’s her account of the amazing party she threw for her daughter. I really didn't think I could pull off a theme party. I am super busy with work, not terribly crafty or creative and definitely not much of a baker or decorator! But when my Harry Potter fanatic daughter asked to have an Harry Potter-themed ninth birthday party, I had to say yes. I think she cast a spell on me!

I borrowed fun ideas from Sophie! We gathered sticks to make magic wands. I got gold wire for the girls to wrap beads and feathers around the wands. Some glued on glitter too! I told the kids different color beads had different magical properties. They loved that!

We held a potions class, doing simple chemistry experiments! I named ingredients like baking soda and citric acid crazy things like “dried bat vomit” and “dragon toenail powder.” We made engineered “basilisk venom” (which they later used to destroy a Horcrux).

The highlight of the party was a Horcrux scavenger hunt I designed after Sophie got my creative juices flowing! I hid the seven objects in which Voldemort hid his soul around the house and designed seven puzzles that led the girls to each. There was a crossword puzzle, a math puzzle, a jigsaw puzzle, a riddle, and more. After they were found, the kids had to "destroy" them, recalling the method each was destroyed in the Harry Potter books!

I awarded house points for each activity. At the end, we announced the winning house during the pizza feast. I awarded small prizes such as bubbles for the potions winner and small gold cups for the house cup winners. Sophie definitely encouraged me to go for it and to keep it manageable and low-stress. Judging from the feedback from party guests, it was one magical party! Thanks, Sophie! Kristen inspired me to take on the idea of a “Horcrux Hunt” to pass on to everyone. Hopefully this can help you easily create the magic for your own little witches and wizards! Feel free to create your own puzzles, games, and challenges. The Hunt
Each team will need to find each Horcrux. Now, if you wish to make four sets of each item for one full set per team, that’s fine, but Kristen came up with what I think was a brilliant idea. At each location she placed a marble in each team’s color. When they found the Horcrux, they claimed their marble and left the Horcrux behind for the following teams. (Just make sure your teams know to take the marble, not the Horcrux!) Some clues can be rolled into a scrolls, others should be placed in envelopes. Everyone will get the same clue, so you don’t need to color coordinate anything, unless you want to. The important thing to remember is that each envelope or scroll must have the same exact items/clues/notes, etc. in it, so you will need one set for each team (so if you have four teams, you will need four of each clue).

Here’s what you will need for the Horcruxes:

Claim the necklace
For this you will need the following items:

Setup
Fill the bucket or basin with water and place the necklace in the bottom of the bucket. If you like, place a hula hoop around the bucket (this will represent the island). Place your fishing pole near the hula hoop. Place four4 other hula hoops in a line directly in front of the island. On the opposite side of the playing field, designate a “shoreline” as far away from the island as you can (at least 15 feet away if possible). Place a hula hoop for each team at this line. Place each team's allotted number of plates in the hula hoop.

How to play
Explain to the teams that they are standing on the shore of a great enchanted lake. They must not touch the water, for if they do, they will raise the dead (you can omit this part if that seems to scary -- the point is not to touch the “water”). They all have rocks (the paper plates) to aid in their crossing. They may not throw the rocks, they may not slide on the rocks, but they may pick up and place the rocks as they see fit. If at any time they step into the water, the whole team must start again. The goal is to get every team member into their hula hoop on the opposite side (the ones lined up in front of the island). To get everyone in the mood, create a scrool with this text:

To find the locket that Slytherin wore,
Cross from the safety of this shore.
Use only the rocks to make your way
To the island you see across the bay.
Each of your team must be present to start,
Not one left behind, though they’re faint of heart!
On the island you’ll find a pole, line, and hook
Use it to fish out the locket, then look!
A new clue you’ll find that will light your way,
You then can cross easily, without delay. As teams arrive at the island they must wait their turn. The team that gets all of its players into their hula hoop on the opposite side can cross onto the island first. Once they fish the locket out, they are handed their very first scroll, and can be on their way. The locket is then replaced by an adult, and then next team may go.

Claim the book (This scroll is handed to the players at the island.)
This is a great place to use a coded clue, so make sure you have pens for all the teams. Each clue will need to have a “key” for the kids so that they can figure out what the code says. Figure out where you want the item to be hidden (for example, the living room) and write out the code by using the key. Copy it four times so that each team has a copy. For your convenience, I’ve created a simple number/alphabet replacement key for you, along with a clue that says “Search for the diary in the place where you find all the books." The book should be hidden well, but not so well that it confuses everyone. Print up this note, and place it in an easy located place in the room.

In this room lies the diary of Tom,
A sad, young boy, who now is gone.
You’ll know the book by the letters it bears, [meaning it has TOM across the cover]
Look under the book, your next envelopes there.

The envelopes can then be hidden under the book.

Find the ring (This is the envelope they will find under the book.)
Kristen had a great idea. She took a picture of the ring prominently displayed in the hiding place. She enlarged the photo on her computer, and printed an 8 ½ by 11 version of the picture on cardstock. Then she cut the picture into pieces like a puzzle and put them into an envelope. When the kids found the envelope, they read the note which explained that they must put the pieces of the puzzle together, then go to that destination.

Find the cup (This is the envelope hidden where you hide the ring.)
Once they found the ring, they found yet another envelope. In this envelope there were pieces of cardstock cut into small cards. On each card was one letter. The instructions were to unscramble the letters to find the location of the cup. Find the diadem (This is the scroll that you hide in the mailbox, or where ever else you decide.)
This is the perfect place to use backwards writing.

Find the snake (This is the clue you would find with the diadem.)
Yet another code that must be broken! This code written in parseltongue (snake language).  Depending on how many pillows and cushions you have, this could take a while.

Once everyone has found the snake, they should receive their last instructions (written or spoken -- it’s up to you) that they should return to the main party area and wait for all the other houses. While teams are waiting, it’s a great time to play Harry Potter trivia for house points.

Destroying the Horcruxes
Once everyone is assembled, tell them that the Horcruxes have been found, but now they must be destroyed. Go through the Horcruxes one by one, and see if the kids can remember how each is destroyed in the book. Hold up one, "destroy" it, then move on to the next...

To destroy the Horcruxes you will need the following items: Destroy the locket
First you will need to get the sword of Gryffindor. Here’s a game that’s perfect for doing so!

Have one player (or adult) sit, blindfolded, at the front of the room. Have them hold the sword of Gryffindor flat in their outstretched hands. One by one have other players sneak up and try to snatch away the sword. If the holder of Gryffindor hears them sneaking up, they can pull the sword to their chest, and the person must sit down and let another player try. Once the sword has been snatched, you can use it to destroy the locket. Destroy the Diary
You will need Basilisk Venom to do this, and so it’s time to bring in your potions knowledge! You can let the guests help, with each one adding an ingredient or stirring as instructed. Make sure you do this in a covered area. For an extra added surprise, add some green food coloring to the bottom of the cauldron. At this point, the cauldron will boil over! Once it’s settled down, use an eyedropper or a straw to place drops of the mixture on the book. The way to destroy the next three Horcruxes are simple and straightforward. Simply mime the following:
Destroy the ring using the sword.
Destroy the cup with the potion.
Destroy the diadem with your fiendfyer flashlight. And lastly there is Harry, the seventh Horcrux. Tell the guests that this Horcrux is the last and final Horcrux, and the only way it can be killed is through love. You can designate the birthday kid as Harry, and everyone can surround him in a group hug... thus defeating Voldemort forever! By this time, it should be time for cake, and hopefully lots of proud chatter about how your brave students vanquished the Dark Lord!