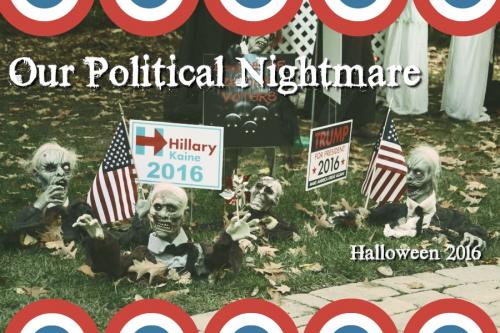 A few years ago, we did what I thought would be our last big Halloween party. But as Al Pacino says in the Godfather, “Just when I thought I was out...they pull me back in.”  Seriously, this year's theme was just too good to pass up.  Given the mess that is this year’s Presidential Election one of our beloved clients suggested we honor it with its own themed Halloween party.

So without further ado, I offer you Halloween 2016: "Our Political Nightmare” Guests entered the front gates where they were greeted by festive red, white and blue bunting, balloon stars, and a zombified donkey and elephant. The trees were festooned with cut outs of some of our most effective Presidents, their eyes bugging out in surprise and dismay. Our political graveyard honored all those who entered and exited this year’s race, and paid homage to the also-rans of past elections. While poor Abe Lincoln literally rolled in his grave. Mr. Bones became Bonie Sanders this year, heckling all who passed him by - proclaiming that every trick or treater deserved free health care, a college education, and a full sized snicker bar. The political "skeletons in the closet" were too many to contain, and were seen busting through their doors. Every child was encouraged to vote before entering at the “Under 18 Polling Station”.  Kids were given golden tokens and asked to practice their civil right.  No voter suppression here. Trump couldn’t resist spending his Halloween with the ladies, so he organized his own Miss-ogynist pageant.  Naturally, Miss Russia took home the crown. Adults were given their choice of two voting booths - one for him, decked out all in gold, and one for her, which sported post-it notes reminding her to delete all e-mails.  The shock came after the person voted, when a hidden door opened and a masked actor confronted the voter.  The screams could be heard throughout the compound. Kids were treated to political carnival games such as "Race to the White House”, “Foot in Mouth Throw Through”,  “Make the Deal Golf”, and “Whack the Mole”.  Our prize table featured patriotic themed toys. Paying homage to this summer’s runaway hit game, we created our own Political Pokemon Go - where kids and adults had to take selfies with 6 different creatures - Michellachu, Christilax, PsyBill, Hilloqueen, Trumpeleon, and Sarahpie. Under the tent we served up chili, popcorn, homemade cornbread and political cupcakes.

Although it rained (lightly) on our parade, it didn’t dampen anyone’s spirits.  This theme created an enormous amount of excitement and engagement.  People were laughing, groaning, discussing, arguing, refusing to go home...it was just like any ordinary day in the Senate.