Cooking Up Some Virtual Fun
Send Handwritten Greeting Cards Online with...
Will she or won't she? Carmelita...
Giftavenger.com - Simplify your gift giving...
Welcome to Motherhood! 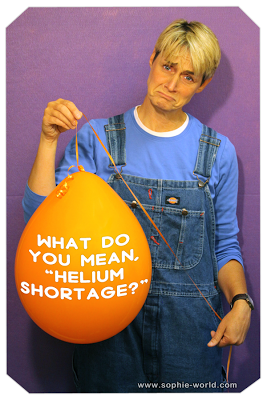 About three months ago, I was hired to do a really cute one-year-old's birthday party. The client was extremely sweet, and her only big request was that she wanted balloons -- and lots of them! As you know, I'm not the biggest fan of balloons, in part because they take a long time to blow up, and also because I seem to be the only one in the company who can inflate and tie helium balloons. I'm not on some kind of power trip; I've tried and tried to train my employees, but they all end up backing away in horror, threatening me with workman's comp for "balloon finger!" Kidding aside, balloons aren't usually that big an issue; I just give myself extra time the morning of the party so I can prepare.

I ordered the specialty themed balloons way in advance, then forgot all about it as other, closer parties needed attention. That is, until two weeks before the party. During our weekly staff meeting, we discussed our sweet client's decor and I realized my tanks were out of helium and needed to be refilled. No worries -- I'll just have Catharine call up our local party store and schedule a fill-up. (At this point, I'd like you to imagine a very loud "loser!" sound going off!) BLLLLLAAAAAATTTTTT! My favorite party store was out of helium themselves! Hmm, I thought, okay… we'll just rent a tank. BLLLLLAAAAAATTTTTT Try again! Not only were there no tanks to rent from them, but no one in the Bay Area was renting or filling tanks! The closest place was in Sebastapol! It was official: there was a big-time helium shortage!

“Shortage?” I yelped to my assistant Catharine, “I thought that was taken care of months ago.”

Sound that loser horn again, because it turns out the answer to that question was a resounding “no.” After two days of very diligent searching, Catharine was able to locate one gas company that relented and said they would fill my tank -- but I had to travel 45 miles round trip, and it cost me four times what I normally paid. What used to cost me $35 now cost $125! Needless to say, this was a tragedy of major proportions. There was no way we could continue to offer helium-filled balloons to my customers. Thankfully none of the other upcoming parties required them, and we added a note to our party proposal page that stated, “Due to the helium shortage, we can no longer offer helium balloons. We apologize for the inconvenience, and are happy to check with local balloon retailers for you. However, we personally can not offer helium-filled balloons.” My heart began to ache for my balloon vendors and suppliers -- this could not be good for them at all.

Why is there a shortage? I thought that helium was one of most prevalent gasses in the atmosphere, but the issue is that it's also one of the lightest, so it basically floats up and away if released. I also wondered where in the heck helium comes from in the first place. After a bit of research, I discovered helium comes from alpha particles emitted by radioactive decay! Okay… did any of you already know that? Evidently, in some places that have lots of uranium, the natural gas produced there contains a high percentage of helium. And since the natural gas pockets tend to be sealed, the helium can be (get this) cryogenically distilled out of the natural gas, and used to fill our balloons.

What I didn’t realize though, is just how important helium is in the medical and technological worlds. Helium is an important element in cryogenics, specifically in the cooling the superconducting magnets that run MRI machines. It’s also used in arc welding and growing the crystals necessary for silicon wafers. 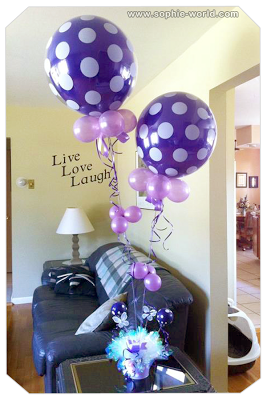 What does this mean for the party biz? Basically, it means we just need to get more creative with the way we create our balloon decor. We’ll have to depend on air-filled balloons instead. Some inventive ballooners have already started to figure out options, like this bouquet done entirely with air filled balloons and thin wire rods (above). I have no doubt that the amazing minds in the balloon world will figure it out, but it does give you pause… I wonder if there will be a day when a now sixty-year-old Johnny will be telling his kids, “You know, when I was a boy, we had balloons that floated by themselves in the air like magic!” To which his kids will reply, “Yeah, but Dad, who needs floating balloons when we’ve got jet packs?”